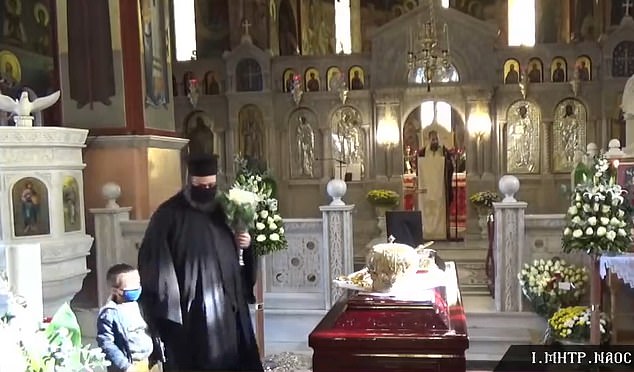 A Greek Orthodox priest sparked outrage after lifting a child to kiss the coffin of a bishop who died from COVID-19 after men in full PPE carried the coffin into the church.

Images of the funeral in the town of Lagadas, outside Thessaloniki, have been shared widely on social media and local news sites, prompting strong reactions at a time when coronavirus infections are on the rise and Greece implemented a strict national lockdown.

In the video, the priest can be seen standing next to a boy next to the bishop’s coffin before lifting the child up to kiss the coffin.

The boy and the priest both wear face masks, but the priest later removes his to kiss the coffin himself. The boy kept his mask on throughout.

Keep Talking Greece reported that the coffin was in fact open and therefore the boy and the priest had kissed the bishop’s corpse, but this cannot be clearly seen in the video, which shows items that appear to rest on the coffin cover.

The priest himself then removes his mask to kiss the coffin with his lips. The coffin had been transported into the church by men in full PPE

During the pandemic, the bishop had been a a strong advocate for the maintenance of communion ceremonies – in which the faithful receive bread as well as wine from a shared spoon.

He argued that there was no risk of transmitting the virus in this way.

The bishop’s coffin was transported to the funeral with the greatest care by six men in full personal protective equipment (PPE).

According to Keep Talking Greece, several other bishops in Thessaloniki were infected after participating in events marking the feast of Saint Demetrius of Thessaloniki on October 26.

Greeks on social media have demanded that restrictions and fines for violating them also apply to priests and the government has promised to take action.

The bishop, who died of the coronavirus, had been a strong supporter of the continued practice of communion – in which bread and wine are shared among worshipers from the same spoon – despite the pandemic, arguing that the virus could not not be transmitted in this way. Pictured: Priests lead the bishop’s coffin into the church

During Greece’s first national lockdown in March, a priest on Cypher Island was arrested for holding a mass despite a ban on religious gatherings.

Churches across Greece are currently closed as part of a three-week nationwide lockdown that began on November 7, but is expected to reopen before Christmas time.

The Church’s ruling Holy Synod said Monday it was complying with public safety restrictions and hit back at critics who accused the Church of acting irresponsibly.

“Some aspiring public opinion leaders neurotically insist on focusing exclusively on Holy Communion,” a statement from the Synod said.

“They cite unscientific correlations with the spread of the coronavirus, in defiance of the epidemiological evidence.”

Christos Giannoulis, a Thessaloniki lawmaker for the left-wing Syriza party, said the conservative government should have sought stronger support from the Church in its public health campaign.

“I think places of worship have contributed to the rapid spread of the pandemic although they are certainly not the only ones: add that to overcrowding on public transport, overcrowding outside schools and lack of tragic testing and we are where we are now, ‘he told The Associated Press.

“If the Church had been the main advocate for wearing masks, for example, things might have been different now.

Restrictions on religious gatherings are part of a nationwide lockdown set to end on November 30.

Currently, people have to text to get permission to leave their homes and can only do so for essential reasons.

Travel between regions is prohibited and a curfew is in place from 9 p.m. to 5 a.m. local time.

The majority of shops and schools are also closed and travelers to Greece must test negative before arriving.

A stark contrast to the central Monastiraki square in Athens. Pictured left: Pedestrians move on their last day of freedom before the lockdown on November 6. In the photo on the right: a worker disinfects the square a day later

Buy a truck or SUV before the end of the year, get tax relief

Sichuan to borrow $ 1.76 billion to inject into 21 small banks