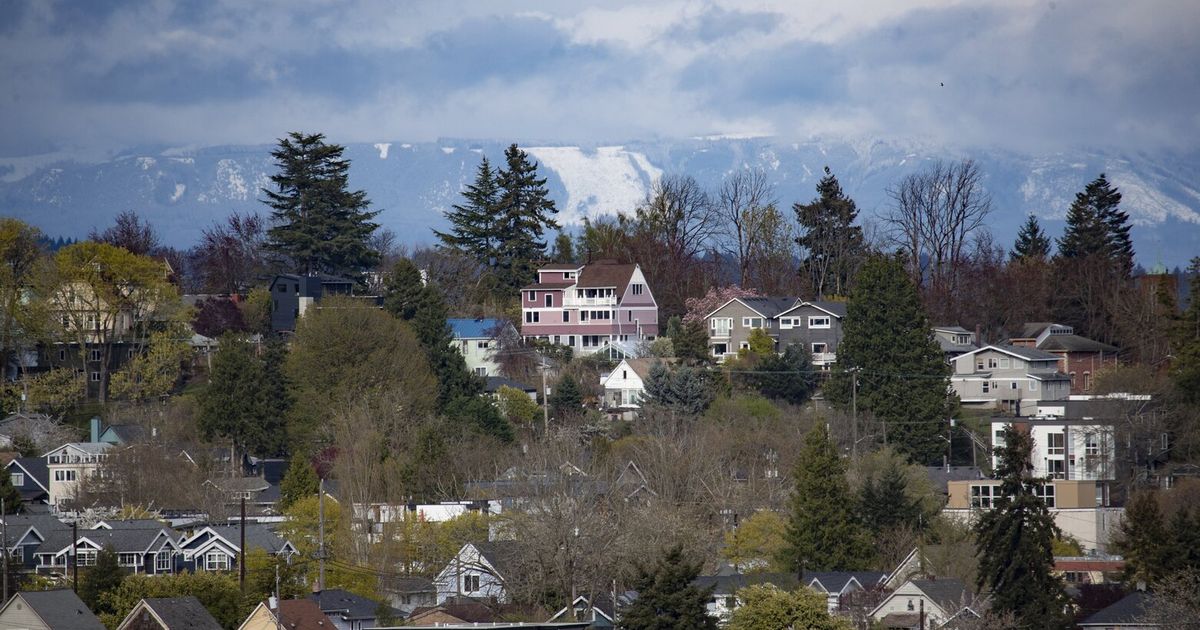 These are strangely good days for local bankers.

Of course, home sales in Seattle and elsewhere have plummeted under high interest rates, and prices are finally coming down. The once lucrative refinancing business is in a coma.

Even the “crypto millionaires” who had “bought nice homes along Lake Washington” have largely disappeared, says Brent Beardall, CEO of Seattle-based WaFd (formerly Washington Federal) and a seasoned observer of the Seattle real estate market.

Yet despite the downturn, some of the local banks that serve the Seattle area have fared well.

WaFd, which operates in Washington and seven other Western states, just posted the best annual results in its 105-year history, breaking records in everything from earnings to loan volumes. Several local competitors — including Seattle-based HomeStreet and Tacoma-based Columbia Bank — also performed well.

This partly reflects individual banks’ strategies through several years of pandemic-related turmoil. But it also illustrates how much the housing sector has changed since the Great Recession, when many banks were wiped out by bad debt – and how those changes are likely to continue to happen even after the pandemic subsides and the economy resumes. housing market in the Seattle area.

Part of the banks’ contrarian performance is due to the recent rise in interest rates, which has allowed banks to charge more for loans. Although the banks themselves are also paying higher rates on the funds they lend, those rates “have not gone up as fast, and so we’re getting that expanding margin,” Beardall says.

Many banks have also benefited from the administration of pandemic-related relief programs. Some community and regional banks, for example, have actually expanded their lending business, despite the economic uncertainty, by offering Paycheck Protection Program loans to small businesses. Half of the WaFd’s 10,000 PPP loans went to non-clients, some of whom have since become WaFd clients.

In total, gross business income in Washington’s banking sector actually grew nearly 2% in the first two years of the pandemic, according to data from the state Department of Revenue. Overall business income rose 5.4% to $266 billion over the same period.

But bankers are also benefiting from deeper changes in the way housing is financed.

For example, even though housing in the Seattle area has boomed for much of the past decade, many local banks have moved away from consumer mortgages, for several reasons.

First, the mortgage industry is painfully volatile. When interest rates are low, “you make a lot of money because there’s a lot of refinancing and home sales are generally good,” says Mark Mason, CEO of HomeStreet, a Seattle-based regional bank with branches in Washington, Oregon, California and Hawaii. But when interest rates rise, Mason says, the volume of mortgages and refinances is reduced by more than 50%.

Second, profits on home loans are shrinking. One reason is that post-2008 banking regulations have increased the cost of loans. Smaller banks also face increasing competition from low-cost nonbank lenders, which now handle more than half of mortgages and home refinancing, according to federal data.

As a result, banks often earn less on a 30-year fixed-rate residential mortgage than they can on other types of loans, including the short-term, variable-rate commercial loans that many businesses prefer and that many local businesses and regional banks are now giving priority.

At WaFd, residential mortgages now represent less than 35% of the bank’s total loan portfolio, down from nearly 50% in 2019.

At HomeStreet, mortgage-related business represents just 7% of revenue, down from about 35% in 2018, Mason says. He expects the bank to pursue even more commercial business lending in the near future – or at least until “mortgage rates normalize and house prices moderate,” he adds. .

These changes are part of broader changes in the banking sector.

Small community banks and regional banks are particularly facing increasing pressure from large banks, which have the resources to, for example, reduce compliance costs by automating loan processing.

That pressure has pushed some smaller banks to focus on niche lending like building apartments or banking services for high-net-worth customers, says Glen Simecek, president and CEO of the Washington Bankers Association.

Other community and regional banks have sought to increase their size and resources through mergers, as in the case of the recently approved agreement between Columbia Bank and Umpqua Bank.

Meanwhile, the pressure to control costs, combined with an ongoing pandemic labor shortage and the popularity of online banking, has accelerated the trend of branch closures. (About 45% of customers prefer mobile banking, according to a new industry survey.)

Seattle alone has lost at least 87 sites, or nearly 10%, since 2017, according to the National Community Reinvestment Coalition.

These changes don’t mean Seattle-area banks are abandoning the housing market. But many are increasingly focusing on the business side of housing. Since 2019, WaFd and HomeStreet have both roughly doubled lending on apartment projects, which can be more profitable than single-family homes, especially in markets like Seattle where rents are rising.

Multi-family loans “have always been one of the safest loans to make,” says HomeStreet’s Mason.

The apartment loan is not without risk. During the pandemic, some investors were skeptical of apartment projects in downtown Seattle due to uncertainty around remote working and concerns about safety. “Is anyone going to want to live there?” Beardall recalls investors asking about the downtown projects.

But Beardall expects the downtown Seattle housing market to eventually recover, and he and other bankers say they are also optimistic about a regional housing recovery.

But these forecasts come with many caveats.

Recovery may take some time. The searing Seattle-area housing market has been fueled by years of unusually strong local hiring, particularly by tech companies. This suggests that a recovery will be prolonged if the recent slowdowns in hiring announced by some technology companies worsen.

Indeed, if hiring slows too much, according to several bankers, the local economy will likely slide into a mild recession, perhaps as early as the end of 2023. Beardall, for his part, puts the chances of a recession at 90%.

Prospective home buyers also shouldn’t expect to see these ultra-low interest rates since the start of the pandemic. Mason thinks it’s too early to tell “where mortgage rates will stabilize,” but Beardall thinks the “new normal” interest rate will likely be around 4%.

And whenever it happens, Seattle’s housing recovery will likely be weaker in market segments that were lagging before the interest rate hike.

The sale and construction of single-family homes, for example, had already faced constraints that had limited the supply of housing. These include zoning laws, soaring land costs, and stricter lending requirements enacted after the Great Recession.

Some bankers expect these constraints to worsen even after interest rates fall. That likely means a housing recovery with even fewer single-family homes for Seattle-area buyers — and even more incentives for buyers, developers and bankers to consider other types of housing.

Put it all together, and going forward, new housing in the Seattle area will be “disproportionately weighted toward multifamily,” Beardall said. Given the high cost of land and permits, developers know they’ll get “more doors, more density” and better profits on multi-unit apartments than on multi-unit single-family homes.

There will always be a demand for single family homes in and around Seattle. But absent a dramatic collapse in home prices — the median single-family home in King County sold for $875,000 in September — demand will likely come from the same kind of high-end buyers who dominated the market. before the slowdown.

Before the recent downturn in tech stocks, tech workers routinely used stock options to make down payments — and bankers expect that to pick up again once tech stock prices rebound.

Other big spenders may not be back.

“I knew it was at its peak when Matt Damon started doing the Super Bowl commercials,” Beardall said.

Coverage for the economic impacts of the pandemic is partially underwritten by Microsoft Philanthropies. The Seattle Times maintains editorial control over this and all of its coverage.

How is your credit score calculated and why is it important? – SteinbachOnline.com