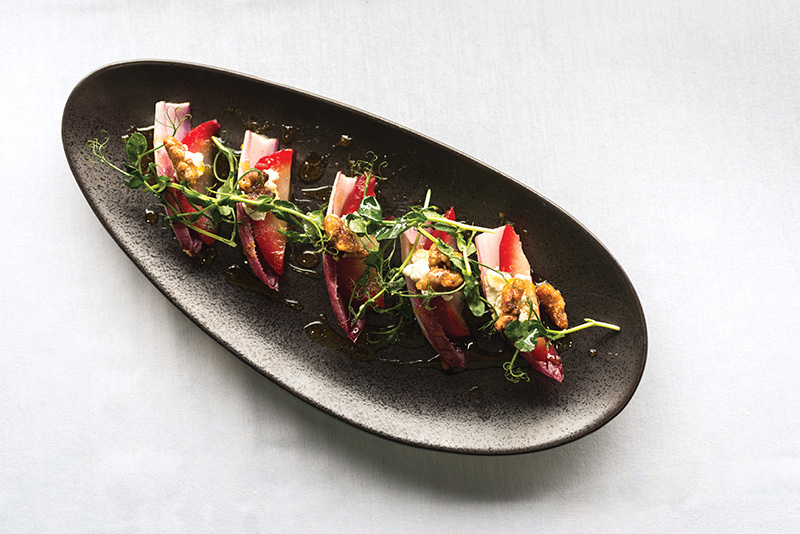 When Chef Omar Mitchell talks about Table No. 2, the restaurant with white linens he opened in the spring of 2019, he shines. “We always like to say we’re a ‘wow’ restaurant with a Walt Disney approach,” Mitchell says. A trip to Disney World, he says, is a memorable experience that will stay with a person for the rest of their life. “This is exactly what I do with Table No. 2. We are creating a fine dining restaurant that leaves a lasting impression with impeccable customer service and delicious food. His voice jumps an octave as he talks about his staff and the impeccable service they provide to diners.

There is only one detail that you almost to lose sight of as Mitchell becomes poetic about his culinary passion project. The doors to Table 2 have been closed for six months. He speaks of the restaurant in the present tense because for Mitchell, table 2 is simply on hiatus as she seeks a new home.

Mitchell cut his teeth at Golden Mushroom, which would eventually become Steve and Rocky’s in Southfield. It was there, under the tutelage of chefs Milos Cihelka and Steve Allen, that he developed an affinity for gastronomy. “Taking a kid from urban Detroit to a gourmet restaurant, I was totally in love,” he says. Although he launched casual restaurants, such as the former Great Lakes Burger Bar in Detroit, as well as Craft Creative Catering, the parent company of all of his culinary entities, Mitchell was determined to open an upscale establishment in the city. . “There are a lot of great restaurants here in Michigan, but I wanted to bring this authentic fine dining back to the area,” he says. “With technology, people these days are used to everything being fast and convenient. My opinion is that we should use today’s technology and trends without forgetting the old-fashioned ways.

Mitchell fondly recalls a time when waiters knew diners by name. When they remembered birthdays and anniversaries and jumped through hoops to greet guests by any means necessary. And that’s how the table n ° 2 was born. In April 2019, Mitchell opened the upscale restaurant where Foster bananas were flambéed at the table and shrimp were cooked in front of guests to release the aroma of garlic throughout the dining room. “If you go to a restaurant, the first bites should be ‘amazing’, ‘amazing’, ‘impeccable’. If they’re away from those powerful words, there’s room for growth, ”Mitchell says. “People come to your restaurant for dinner and entertainment, so let’s give them that elevated experience.”

Chef Mitchell remembers the good old days at Table # 2. “To this day, I can’t google my reviews without being moved because it’s such a remarkable thing to hear the experiences that people have. have lived, ”he says. Diners flocked to the restaurant for its surf-and-turf-forward menu. Southern crispy fried chicken was stacked in mason jars and pierced with sprigs of rosemary. Tomahawk steaks rubbed in verdant grasses were carved next to the table, and Alaskan king crab legs and lobster were served on layers of crushed ice.

Along with great food and stunning food presentations, Mitchell says his staff went above and beyond the call of duty to provide diners with a comfortable and enjoyable experience. “We try to make sure that we exceed every guest’s expectations, and I think we do a great job with that – Walt Disney World ever, already forget about customer service. Mitchell tells the story of a time when a steak a guest wanted wasn’t on the menu. Instead of suggesting another menu item, an ambitious member of staff came out to purchase the dinner choice cut. It chronicles the times when valets escorted guests to their cars with oversized umbrellas during spring showers. The restrooms were stocked with a range of women’s fragrances. The way he remembers his days at 18925 Avenue Livernois is endearing. It’s as if he’s wearing a chic pair of rose-colored glasses as he recalls a time that could otherwise be seen as a time of perpetual turmoil.

Location can make or break a business. Mitchell turned to restaurants like Selden Standard, the now hugely popular establishment that opened in Midtown before the neighborhood became the hotspot it is today. “I give Selden Standard a lot of credit, because when they first opened, a lot of things downtown weren’t there,” he says. “They opened their gourmet restaurant with empty lots to the left and right of them, and they were very successful.” Mitchell followed their lead with what he calls a “build-it-and-they-come” approach. I said, ‘I’m going to drop this fine dining restaurant right in the middle of the urban community and see what happens. “”

In addition to being motivated to open a first of its kind in the neighborhood, Mitchell also wanted Table 2 to serve as a resource for downtown people who would otherwise be overlooked in the workforce. “Ninety-eight percent of my employees are single mothers, single fathers, convicted felons, high school dropouts, or African Americans who just never had the opportunity to do so.” , says Mitchell. “It was important for me to make sure that the residents of Detroit had a place where they could say, ‘I was looking for a job, but I love this place, and now it’s my career. Putting a gourmet restaurant under the hood has been an honor and a pleasure for me, and I don’t regret it for a second.

And while Mitchell had the good idea to open Table 2 in a booming business district, the result could only be described as the right place, the wrong time. A few weeks after the restaurant opened, the city inaugurated a construction project that would upset Avenue Livernois, disrupting pedestrian traffic and parking and, ultimately, the business of table n ° 2.

Shortly after the streetscape project ended, the pandemic struck and the owner of Table 2 decided to sell the building. Rather than shutting down his business, Mitchell felt his entrepreneurial spirit take off. In the month before it closed, Table 2 introduced a 50 percent take-out service. “Since people weren’t going to get full customer service, I decided to cut the price in half, and it took off like wildfire. It also allowed me to keep my staff a bit longer throughout the pandemic. “

Mitchell has this supernatural ability to see the bright side of peril throughout his journey. In May, Table n ° 2 left its home in Livernois. In less than a year, Mitchell watched the development and demise of his empire, but instead of dwelling on the series of unfortunate events, he focused on the small business loans he received in the middle of the pandemic and unemployment that its employees were able to collect and the locals who demanded to help its resettlement efforts. “When I got the word out to the community to see how I could settle down in a new place, the amount of help was incredible,” he says. An abundance of supporters have reached out to propose vacant buildings in the Detroit subway. “People all over the world hear all the bad things about Detroit, but they don’t hear when the Michiganders get together like this.”

With nearly 40 options for a new location on the table, Mitchell sat down to assess what he would need for a new space that could withstand the demands of an unpredictable pandemic. “I was looking for at least 150 seats, a great location, great monuments and a place that could entertain people and at the same time meet the needs of corporate clients who might want to organize different events,” he says. In October, he found a match.

The second iteration of Table 2 is expected to take over the old Monroe Street steakhouse in Greektown. The deal, negotiated with Dan Gilbert and the Bedrock team, upgrades the restaurant from a 2,000 square foot space to a 6,500 square foot multipurpose duplex. “Every person who direct message, text, call or email said the same thing – all we went through was a blessing in disguise, a ray of hope, all great phrases.”

The new space allows Mitchell to bring the elaborate dining experience of his wildest dreams to life, with a pandemic twist. “You know when you go to fine dining restaurants and see that table sitting in a corner surrounded by crumpled velvet curtains and a fireplace inside?” That table that everyone wants? I try to copy and paste a lot of those in the restaurant for tables for two so that guests can have their own little private dining experience. Upstairs, he says, is where he’ll be hosting parties once gatherings are allowed again.

Yet the fate of the second act of Table 2 hangs in the balance as the pandemic persists. “If we don’t flatten the curve, it will just plunge us into a deeper hole, and so hopefully that will happen because most of us restaurants, if not all, are on life support. and we can’t afford to be on life support, “Mitchell says.” We have to breathe on our own, but we can’t breathe on our own if the circumstances get worse. “

In November, Gov. Gretchen Whitmer put in place a three-week lockdown that suspended all meals indoors, which would postpone the opening of Table 2 for another two months. Either way, Mitchell is determined to give Table 2 the shot it deserves. “I decided to stick with the # 2 table because of trial and error. I know people love the concept, and I do exactly what my guests and employees want me to do, and that’s to continue Table # 2.

April 2019 – Beginning of the construction of the streetscape in Livernois

Meet the chip that will power the Samsung Galaxy S10